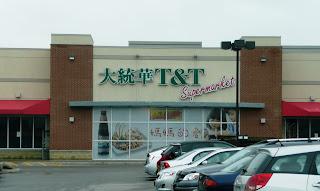 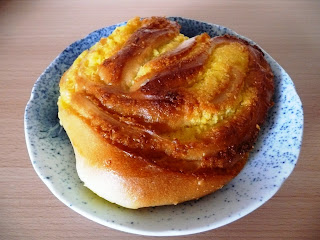 For those who aren't aware, T&T is a chain of Chinese/Asian supermarkets nation-wide. Of course, the majority are in the Vancouver area and around here in Toronto. Oddly enough, despite my not being the biggest fan of Chinese baking, T&T also happens to take home the silver medal for best supermarket bakery (Whole Foods, if you recall, won bronze)! It can be somewhat hard to believe, but T&T, with their sweet and savoury bakery department put other big chains to shame. Most goods may not be to my taste (and you really have to watch out with ingredients-lists here, as some items are pretty loaded with preservatives (especially the on-counter goods like coffee cakes), artificial colours and flavours, and other very delicious sounding chemicals) but their variety is was amazing, with goods ranging from store-baked baked goods like Chinese buns, coffee cakes, cookies, tarts to products from other bakeries, including mainly Korean and Filipino stuff. 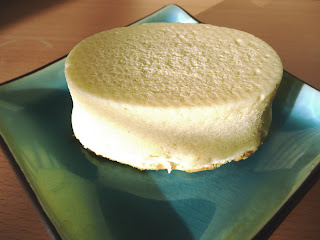 T&T also sells a whole bunch of cakes with varying levels of tastiness; if you're curious, definitely try the Asian flavours: green tea (the best is by far their Japanese Green Tea), taro (aka purple yam), mango, durian, etc. They do venture into more "European"-inspired cakes (as well as some occasional baked goods), but I recommend staying away from these, unless you love that "bombarded by Cool Whip" feeling. My brother once bought a "fruit cake" for someone's birthday and it was disgusting -- I haven't bought any cakes from them ever since.

However, I do still keep coming back for the tasty variety and the amazing prices, with single buns around one dollar and larger baked goods for more people never being more than $4, with the exception of their Japanese cheesecake. *see below* Plus, at least in the Mississauga location I shop at, if it's not freshly baked, they often have products reduced two-three days before the due date, so you can snag stuff (like the aforementioned cheesecakes) even cheaper. ;D 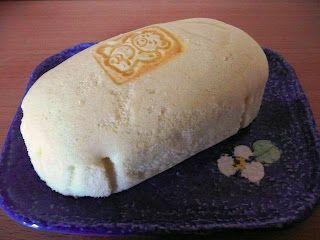 Here are a few highlights/past purchases:

It's hard going here with the intent of buying something different for Cake Tour purposes, since I adore this first item so much and have to get it every time I do ^^. The English name being "Steam Cake" ($1.49) and with the little bear stamped onto the top, I was a little sceptical at first and thought it might be meant for little kids. It does have this digestive cookie-like taste to it, but that's what makes it so good; they occasionally have mango or chocolate flavoured as well. It's so light and fluffy, the sweet dough being steamed just like a Chinese bun (available at the Dim Sum counter, btw :)), and just super yummy! *-*

Another recommendation is their similarly light and fluffy "Japanese cheesecake" ($1.69 for a single//$6.49 for a large -- I'll have to back and verify this to make sure. I forget. -__-) I'm not sure how they make this, but I believe they make a sort of dough and mix the cheese directly into it, so you actually just have a hunk of cheese. This 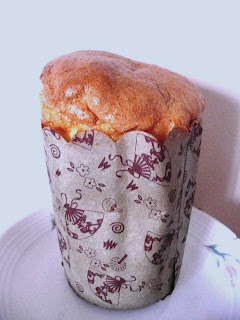 is amazing, and especially in comparison to N. American cheesecakes (which I personally cannot stand), really worth it if you want a nice, tasty cheesecake without feeling like you just ate a tub of Philadelphia cream cheese. :| Highly recommended.

You can also snag yourself a cupcake ($1.09), which is a Chinese bakery staple that T&T makes pretty well, although they sometimes do the mistake of packing them too soon and they get really mushy. It's not the best I've tasted, but it's a hard thing to screw up, seeing as it's just dough. ^.~

You can, of course, head over to their wall of packed buns and pick up yourself ($0.99) one from a whole variety. Sweet buns are usually flavored with coconut or pineapple. The one pictured at the very top is a pineapple bun. It's definitely another regular item at bakeries and well, it's a pineapple bun. ;) (yes, I'm so failing here....)

For the purposes of putting something more traditional or interesting up, I also picked up this strange, flat "Red Bean and Black Sesame" cake ($1.09) for my more adventurous brother. Expecting it to be stuffed with red bean paste, it was actually a denser, sweet dough baked with full red beans; he really liked it though, so I guess T&T really can do no 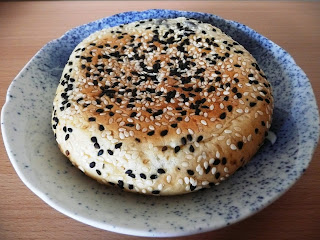 wrong with their Chinese and Asian goodies.

Overall, this is a great place to sample a whole bunch of Chinese baked goods; with a majority being baked constantly in store, the T&T bakery is really a bakery that other supermarkets (it's pretty laughable, for instance, that Loblaws now owns these guys) should take notice of and, maybe, try to emulate a little more. And while there, you can buy yourself a small tub of chili chicken for $3.99 at the hot food counter. ;DDDDD

[EDIT] As you may have noticed, T&T used to possess the silver medal for the best supermarket bakery. This, however, I've decided to take away, simply because even looking up at my post makes me realize that the bakery section (the supermarket as a whole, in fact)  has gone really downhill in a fairly short amount of time. Actually, in my usual T&T location in Mississauga, 80% of what was mentioned in this post is no longer available. The bakery section has been reduced; selection is down and so is the amount of filling in things like coconut or red bean buns. Individual buns are vacuum packed (doubtless so they don't need to be freshly baked every day??), don't feel fresh and don't even look appetizing. With all the other little and big changes in store (like hot food now sold by weight), I can't say I want to go to T&T anymore, at least not until I really need to buy staples. Take that, Loblaws. :/

Mimi
Hello and welcome to 'Mimi's Cake Tour', a site dedicated to scouring the world (somewhat... I don't have that sort of money :D) for the greatest and yummiest cakes, pastries, baked goods, and tasty treats! I'm Mimi, your tour guide. ^^ Here, you'll find (hopefully) helpful and in-depth reviews of bakeries and other places where you can buy your goodies. Bon appetit~! ^.^

Mimi's Cake Tour on the Map!!